It is with sadness that I learned of the recent passing of Fred Jones and would like to extend his families invite to attend his funeral on the 8th March at 11:15 at Eltham Crematorium.

I first met Fred in early 1980. He like Ray Appleby with Colin, had been drawn into Cycle Club Bexley by his son Peter. Colin and Peter were the fast youngsters that I aspired to when I started racing, whilst Ray went on to be a good mate and prolific club member breaking many Vets records. Fred however didn’t get the racing bug and instead he stepped up at the (I think) 1981 Club AGM to fill the very large shoes of the Club President and outgoing Treasurer Arthur Boxall. The symmetry being that the Fred years are sandwiched by the Boxall family and having only three treasurers in 56 years must be some kind of record - all three have given many, many years’ service keeping our books balanced and straight, with Fred being our treasurer for around a quarter of a century. After he handed over the treasury duties, Fred was honoured for his very long service to the club when he was asked, accepted and became President of Cycle Club Bexley.

Fred didn’t just help with his official job in the club counting house, he also held up 1000’s of riders over the years giving them the ‘famous’ Fred push-off…which was worth several seconds in a ten and probably gave me my only ride inside 23 minutes on the club course. He was also a great joke teller, in the style of Dave Allen…they were very long and drawn out with a brilliant punch line at the end and became part of the committee meeting standing agenda; the committee meeting could not be concluded without a joke from Fred.

Outside official duties Fred was a great supporter of the social side of the club and I was lucky enough to go on a number of trips with Fred over the years, including Gent, Antwerp and the infamous day trip to Boulogne (you will need to ask an older member about that!!!)

He was always a great person to keep the spirits up and help you see the funny side of life, which I always suspected was due in part to his job travelling around the UK as a welfare manager for the CEGB helping people that were in need of support. It was just in his nature to be kind and caring and very calm and with his calmness saving a club open event when a car drove into our own Keely Corder out on the course; when the Police arrived at the HQ demanding paperwork, Fred stepped in, calmly took over, stopped the panic and ensured everything continued as normal with a simple and absolute clarity to get things done whilst keeping the event running.

Sadly for us all, towards the end of his life Fred developed a form of Alzheimer’s which ended his joke telling and his participation within the club; his last club appearance was at the club dinner about 6 years ago where he stood and said a few words to the guests.

May he find his fellow club members in heaven, in a pub garden in the sunshine and sit them down with a beer ready to tell them a good (long) joke.

Sadly, and as many of you will be aware, John King, honorary life member of the club, died this week aged 87 following a long period of ill health.

John was a founder member of the club in 1966, having previously belonged to the Thames Road Club.  As well as being an active racing man and club rider, he was a timekeeper, course measurer, coach, time trial promoter, and the long-standing organiser of the Kent CA Reliability Trial.

We offer our deepest sympathies to his family and friends.

Sadly, and as many of you will be aware, John King, honorary life member of the club, died this week aged 87 following a long period of ill health.

John was a founder member of the club in 1966, having previously belonged to the Thames Road Club.  As well as being an active racing man and club rider, he was a timekeeper, course measurer, coach, time trial promoter, and the long-standing organiser of the Kent CA Reliability Trial.

We offer our deepest sympathies to his family and friends.

We are very sad to report that club member John Healey passed away suddenly on November 4, as a result of a heart problem.

John was a life-long cyclist who grew up in Fawkham.  He joined his first cycling club, the Medway Wheelers, in 1952.  John also took up tricycle riding and joined the Tricycle Association in that same year.  While primarily known to many as a tricyclist, John was a complete allrounder who took part in nearly every facet of our sport over the many years he was involved.

I first met John at an inter-club grass track meeting in 1969, by which time his club had become the Medway Velo.  In a field of mainly junior riders John was clearly the most experienced, and this showed in his riding, he had raced on the grass many times and had excellent bike-handling skills.  John was a very accomplished tricyclist, and a 1968 Cycling report describing one of his many wins in tricycle kermesses on the Isle of Man included his picture with the caption ‘Kent’s top tricyclist’.  This summed John up perfectly.  He actually won 17 of these events on the Isle of Man between 1962 and 1976, and was without doubt the finest exponent of tricycle kermess racing our sport has seen.

John always said his successes in these events stemmed from his experience in road racing; he was also an accomplished roadman who had spent a summer living and racing in Belgium in the 1960s. John also rode very successfully in time trials at all distances, on both two and three wheels, he was a very strong hill climber, a cyclo-cross rider, and a place to place record holder – we think that he and Geoff Wiles still hold the Kent CA Gillingham to Canterbury and back tandem tricycle record.  They set this in a winter snowstorm, and on a steep descent Geoff putting his head inside the back of John’s jersey to keep warm!  Outside of racing John did much club riding and as he did not drive a car cycling was usually his means of getting about.  He also went on many cycle tours – one of the first being to Lands End and back as a junior.

Around 15 years ago, after a less active period in his cycling, John joined the CC Bexley and resumed riding TA events in Kent and occasionally further afield.  I caught him in one of these in 2006, only to break my chain a short distance further down the road.  John insisted I should take his machine and carry on as I had a chance of winning, which I then proceeded to do.  This was a great act of generosity on his part and something he had done for others on at least one previous occasion.  John continued to race up to 2009, when a few health problems forced him to reduce his rides to shorter slower ones with friends to the café, but he always helped with marshalling or other jobs at the TA events.

Having attended Gravesend Grammar School and completed an apprenticeship, John spent the early part of his working life as a boilermaker at the BP Refinery on the Isle of Grain.  Eventually he began to work extra hours there over the winter, enabling him to take the summers off completely, partly to allow himself more time for cycling.  In later life John worked for himself, which again gave him more time for cycling.

John never married, but his funeral was well attended by his many friends, as well as his family.  At the end of the service his great sense of humour shone through with the playing of the Ying Tong Song; he had always been a Goons fan.  John was a great character, very much a one-off, and he will be sadly missed by all who knew him.  We offer our deepest condolences to John’s sister Sylvia, and to the other members of his family. 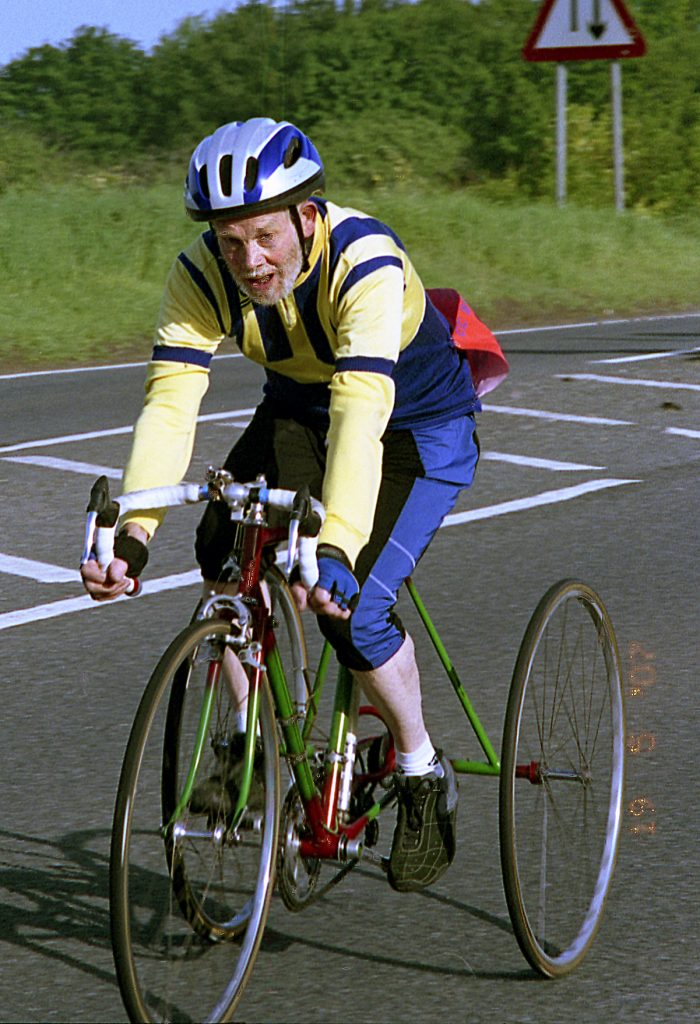 I am sorry to say that Richard Goodchild passed away on Tuesday. He had been a shining light in our club until alzheimers took him away from us a couple of years ago.

Our heart-felt wishes go to his wife Deborah and his family at this sad time.

Richard's funeral service will be on Thursday 19th December at 13:30 at the St Martin's Church in Eynsford, all are welcome. 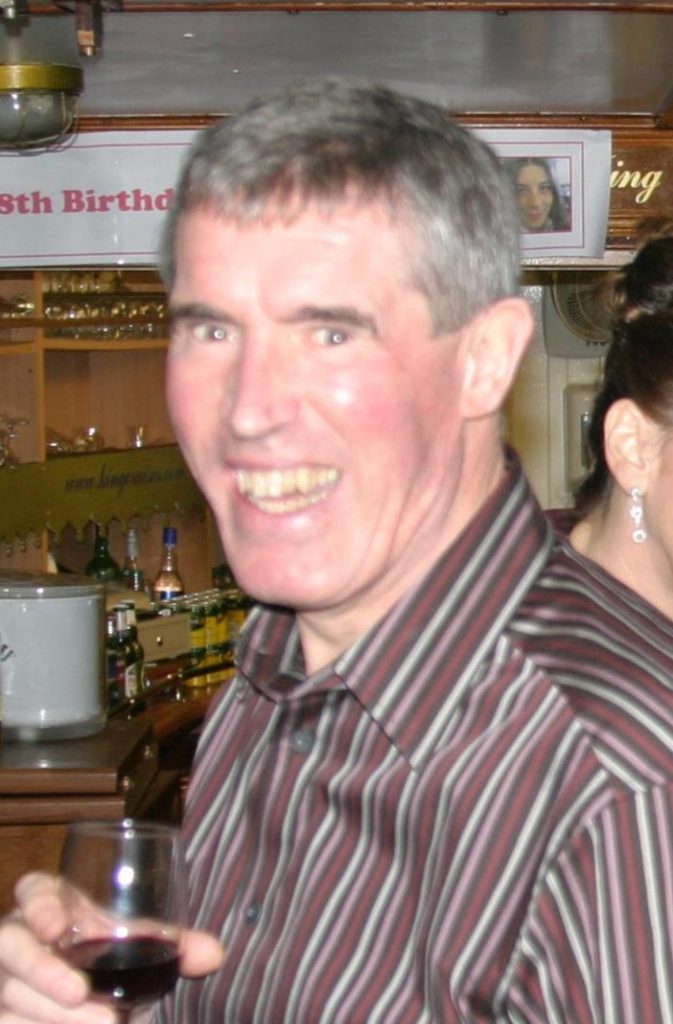 It is with great sadness that we write to advise that John Coster, a founding member of C C Bexley, passed away on Wednesday 11th May, he was 83.

John still managed to ride his trike up to the Trosley Cafe to meet with his club mates up until very recently, he remained cheerful through great adversity.

He will be sorely missed.

"So sorry to read the sad news of John's passing. A great clubmate and fellow cyclist who I have known since the mid fifties. A wonderful example of enduring adversity whilst retaining his lovely sense of humour." 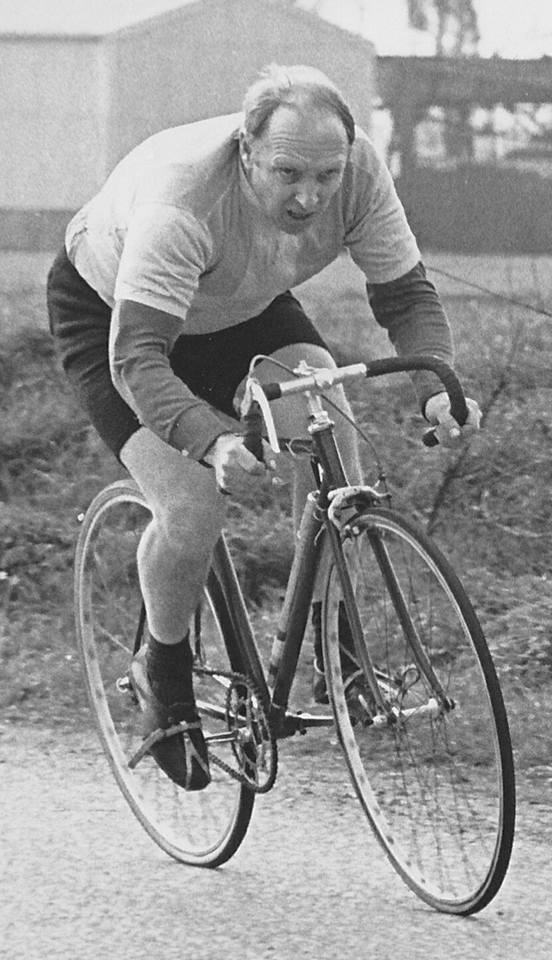 It is with great sadness that I write to advise you all of the loss of a pillar of C C Bexley. Anne finally succumbed to the ravages of an illness she had been fighting for a number of years.

Anne was born and bred in Newbarn and, with nothing for a young person to do there, she took to riding her bike and quickly got in to cycle racing and time trials.

Anne is particularly remembered for riding with a handkerchief always tucked up the leg of her shorts to ensure that she was never caught with a runny nose – I am sure that it also doubled up as a makeshift field dressing should it be required. When she left school she went to work for the British Cycling Federation for a while, perhaps this is where she discovered her interest in organisation and timekeeping, no one really knows for sure.

Anne was actually the first Lady Timekeeper in Britain to time a National Championship Time Trial, at the time a lady timekeeper really was quite an unusual sight.

Anne has been a member of Cycle Club Bexley for the majority of, if not all of, it’s 50 years and during that time she has been the Club Secretary, Social Secretary and on a number of occasions both Club and Social Secretary for much of that time. She leaves behind a strong example for us all to follow.

Our thoughts are with Brian and all of her family at this sad and difficult time. 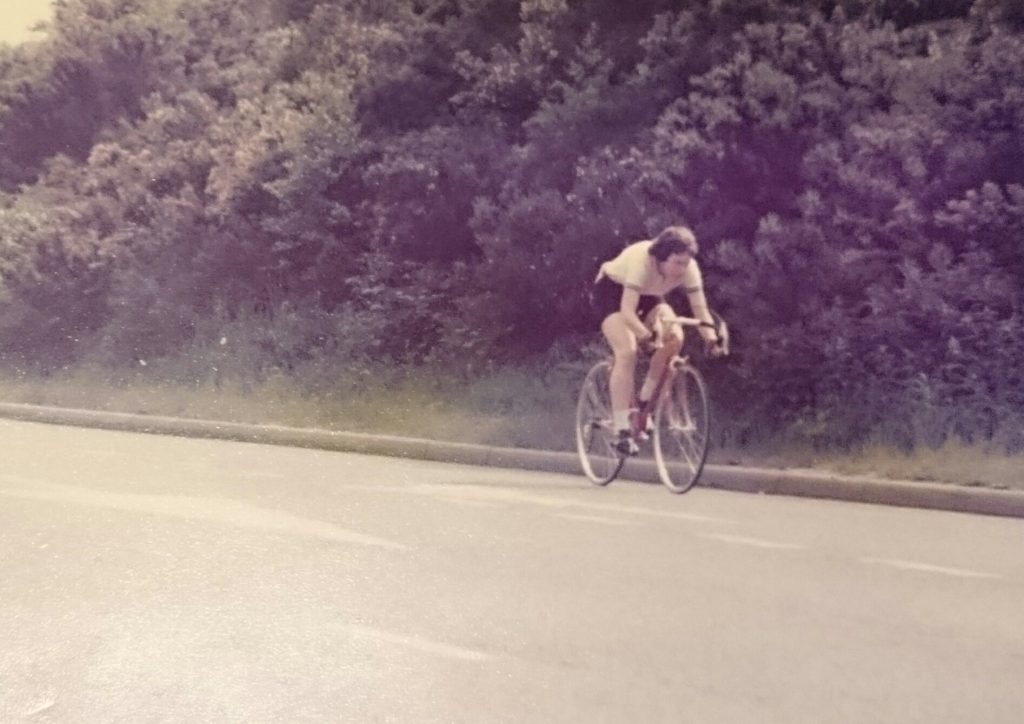 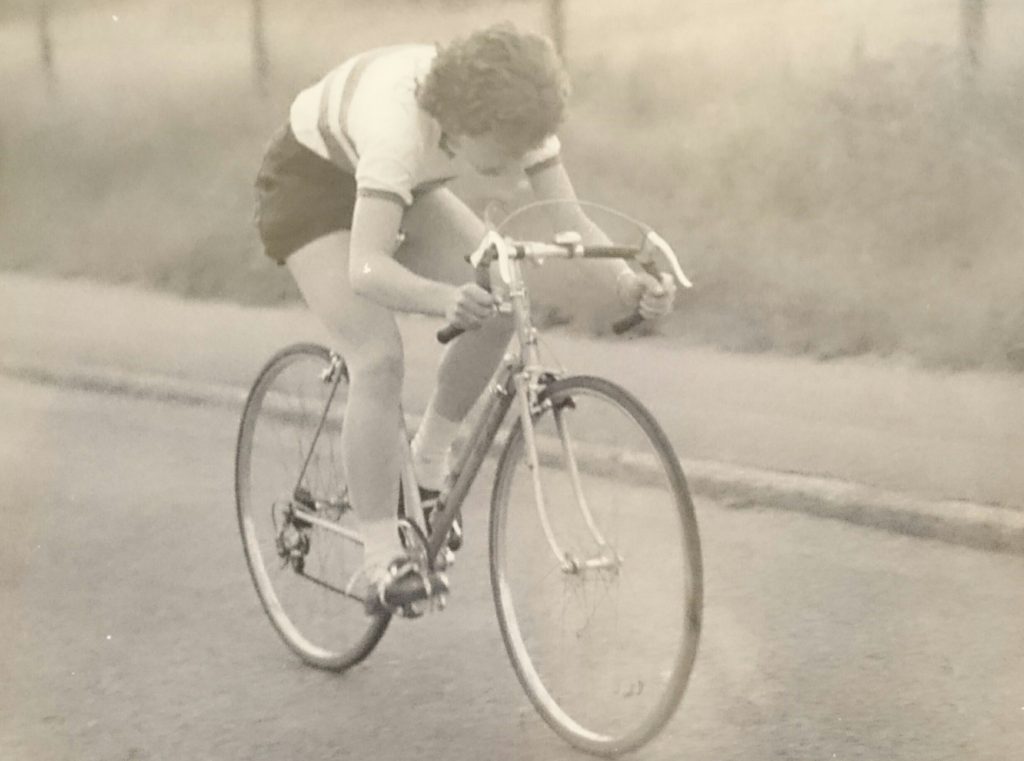 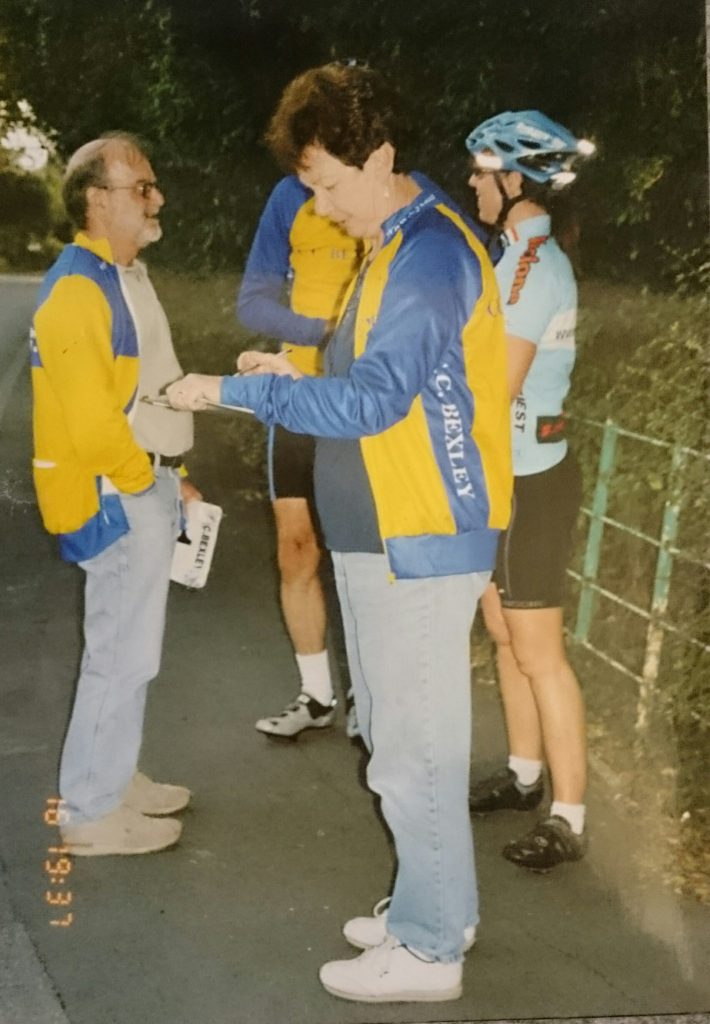 It with great sadness that we would like to inform our members of the passing of Brian Richards, a former club member, died last Wednesday, 22 November, following a long illness. Brian was a tricycle rider who rode many long distance events, and after ending his racing career he was a regular helper in TA SE Region events.

Brian then dropped out of club cycling when he became ill and he was in a nursing home in his final years.  Brian's wife is keen for every one who knew Brian to know he has died, and she will let us have details of his funeral in due course.